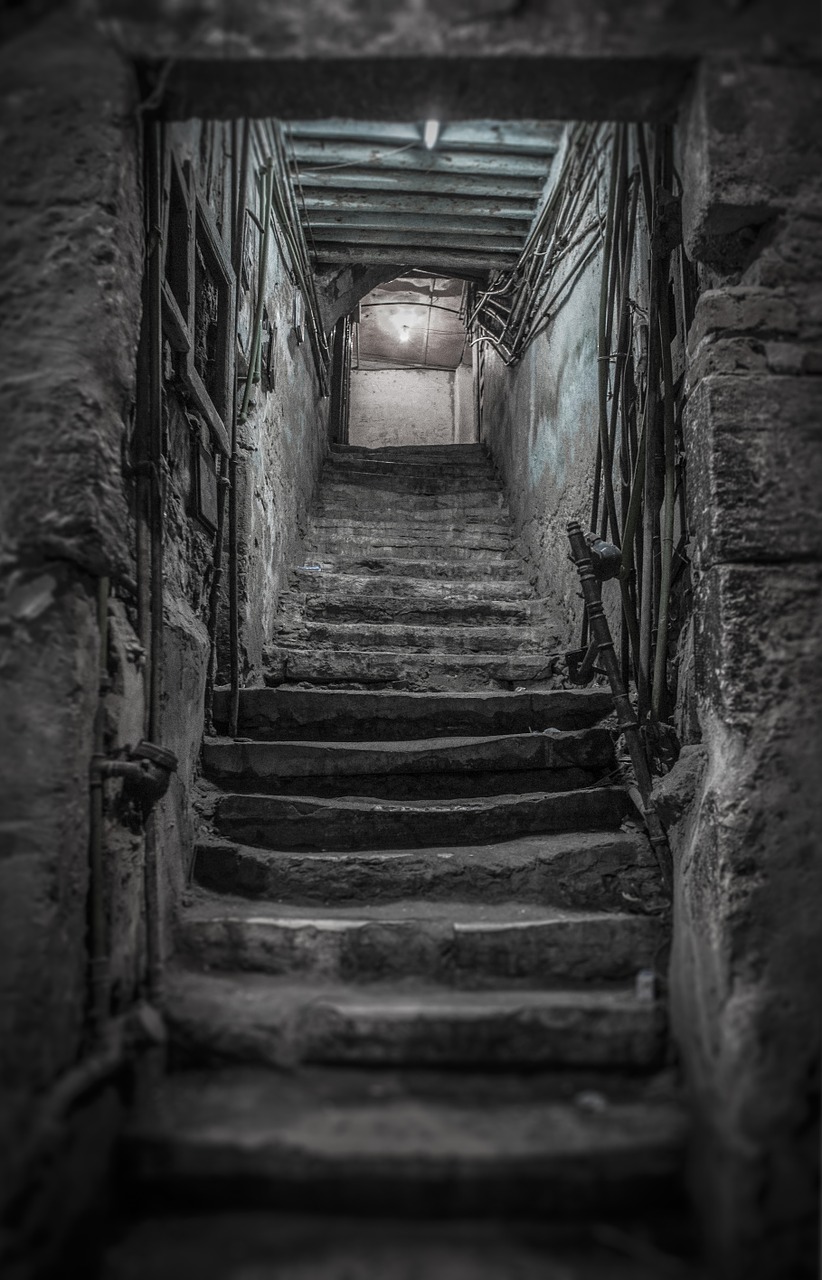 The basement door creaked open on its own. The pungent smell of musty air, cold and damp, hit her hard, stinging her eyes. Wafting was much too delicate a term. This smell came at her like a rabid dog. She turned her head to take a deep breath of fresher air before descending.

She wobbled on the first step, catching herself on the railing. She wouldn’t need to worry about what was at the bottom of those steps if she broke her neck getting down there.

As a realtor, she had done some gross things; empty a smelly litter box, wipe down a dirty bathroom, hide adult magazines in a dresser drawer, but this was different. Those were disgusting tasks due to the laziness or forgetfulness of her clients. This was more…sinister.

She looked down at her watch. She was one of the few people she knew who still wore a watch. She may be old fashioned, but she thought it was much more ladylike and polite to glance discriminately at her wrist than to pull out her cell phone at the bottom of her purse whenever she needed the time.

3:05. Great, she had to be across town to take a written offer from the Dolchecks. Again. This was the fourth house they were making an offer on. What a waste of time, the Dolchecks. If you offer twenty thousand below asking price, your offer is not going to be accepted. It’s not new math, just basic common sense. Sometimes, she wondered if they had any intention of buying a house at all. Or if they just wanted to use her to traipse through people’s homes.

She really did not have time for this. The heat went out in this old cape yesterday and she was holding an open house in two days. Problem one was getting the heat running. Problem two was turning this smell of death into something less noticeable in time for the open house. There was only so much potpourri could accomplish.

A terrible thought entered her mind. What if there was something dead down there? What else would trigger a gag reflex like this? Maybe a rat or raccoon had gotten trapped in the basement and met its demise. She tried to hold her breath as she descended the stairs. It was no use. The smell had permeated the air, her clothes, her nostrils. She would be smelling this for days.

Time to get this over with. She moved carefully, taking the steps one at a time, with a clomp, clomp of her heels. She just needed to hit the pilot switch and the furnace should kick on. That’s what the plumber said after she called and made sure the oil had been delivered last week.

Edna Spooler, the owner of the home had died last spring. She couldn’t understand why the house hadn’t been put up for sale before now. Maybe her next of kin didn’t want to deal with it. But it had to be done. Why not get it over with? Says the woman who just spent 10 minutes avoiding the basement.

She hadn’t even met the nephew who was in charge of listing the house. Keith Abbot had left a cryptic message on her machine last week. He said his great aunt had died last spring and he had been given my name by a local acquaintance. He left a key under the mat and asked me to go check on the house, write up the paperwork, and list the house by the end of the week. He was flying in to sign everything on Saturday.

She hoped he planned on doing something with this hideous furniture. She assumed Edna had been an elderly woman. The house certainly looked lived in, but she probably hadn’t changed the décor in forty years. It was spooky how lived in it looked. There was a newspaper on the kitchen table, opened as if someone planned on coming right back. Edna probably had planned on coming right back. Poor Edna.

She stepped off the last step onto the concrete floor. It was so cold down here, and the stench. Oh, God. She turned at the bottom of the stairs and walked toward the furnace. There was something behind the furnace. A large sheet covering something. Don’t look, she thought, just hit the damn button and get out of here.

Suddenly, the basement door whipped open. She ran back to the bottom of the steps to see an older woman standing there, at the top, looking casually down at her.

“Who are you?” she asked the woman.

“I’m Edna, dear. Keith, turn the furnace back on! It’s freezing up here,” she yelled down as she slammed the door shut.

She turned just a moment too late to block a hammer coming at her head. But not too late to see the bodies of two of her competitors, peeking out from under the sheet behind the furnace.